When you're flying an airplane, it’s critical to be able to monitor the status of your electrical system. If you have a glass cockpit, it's even more critical. Only Vertical Power gives you the level of detail and control you need for today’s electric aircraft.

The VP-X (the X is pronounced "ex") integrates with many popular EFIS products enabling you to monitor and control your entire electrical system on the EFIS display. In addition using the EFIS for attitude, navigation, and engine information, you now can use the EFIS display to monitor the health of your electrical system, view and control the status of individual circuits, and respond to circuit faults.

Vertical Power offers these capabilities through the use of our patented electronic circuit breaker (ECB) technology that is at the core of all of our products. Of course, ECBs provide circuit protection like old-fashion thermal circuit breakers, but ECBs do a lot more than just detect circuit faults. ECBs are intelligent, configurable, and offer capabilities not otherwise available with old-style breakers. For example, ECBs can detect a burned-out landing light or disable the starter circuit while the engine is running.

The VP-X works in conjunction with many popular EFIS products so you can monitor and control your entire electrical system on the EFIS display in addition to attitude, moving map, and engine gauge pages. View circuit faults, circuit status, and trim & flap position.

Electronic circuit breakers are fully configurable to match your specific aircraft. You can set the circuit breaker value for each ECB, and you can assign which switch controls the ECB. And you can use any type of switch you want for the avionics master, boost pump, landing lights and other functions.

The VP-X is built using the same field-proven hardware and software technology as our other products. It’s been proven in hundreds of experimental aircraft over thousands of flight hours. And you can easily wire backup circuits for critical avionics to eliminate any single point of failure concerns.

The VP-X supports a single bus electrical architecture with a single or dual alternator configuration. It additionally supports the ability to measure the voltage on an aux battery. There are enough circuits to wire a typical RV (including the RV-10), Glastar, Lancair Legacy, Velocity, Cozy, or other 2 to 4 place aircraft.

The VP-X uses a third-party EFIS screen to display faults, flap and trim position, and individual electrical device status. You get the best of both worlds—ECBs are remotely mounted yet you can view their status and reset a fault from the EFIS screen. The VP-X is hidden from view and doesn’t take up any space on the panel. The screen below is an example of an electrical system display on the EFIS where you can view and control each electrical device.

The VP-X Pro includes Vertical Power’s new DualBuss™ technology that has two independent power busses in a single system, delivering unprecedented levels of redundancy and safety. Builders can now easily divide avionics and other electrical loads between two power busses, and should one bus controller fail the other bus will continue to operate independently and be able to provide power to the starter contactor. Each bus controller is powered by an independent power supply and microprocessor.

Electrical fault alarming and resetting on EFIS. When a circuit breaker pops, you may or may not know it. When the VP-X detects a fault, an alarm is shown on the EFIS and also may flash a master warning light and sound an audio alarm in the your headset.

Short circuit alarm
When a short circuit is detected, the VP-X opens the circuit and generates a fault on the EFIS. You can then leave the circuit open or reset it manually from the EFIS screen.

Current fault alarm
When a device draws no current when turned on, the VP-X opens the circuit and generates an alarm on the EFIS. You know right away if a landing light is burned out, an avionics fan has stopped working, or the boost pump is inoperative, for example. The feature can be turned on or off for each individual circuit. You can then leave the circuit open or reset it manually from the EFIS screen.

Configurable panel switches
The switches on your instrument panel for avionics, landing lights, boost pump, and other items are wired directly to the VP-X.

DualBuss™ technology
Two independent power busses in a single system. Read more a few sections down.
Over-voltage protection. Disconnects the active alternator if an over-voltage condition is detected.
Backup power for critical avionics. You can wire backup circuits for critical avionics so in the event of a failure there is an alternate power source.

Land light wig-wag with auto turn on & off. When you turn the landing lights on they are steady on the ground and then automatically pulse (wig-wag) while in the air. When you come in for landing, the lights are pulsing, but then remain steady below a specified airspeed. You can also set a desired warm-up time before the lights begin to pulse (typically for HID lights).

The VP-X drives the electric pitch and roll trim on your airplane based on inputs from external trim switches. It supports standard trim switches on the stick such as those on the Ray Allen, Tosten, or Infinity sticks (Do not buy the sticks with embedded relays).

Solid-state, no relays
The control circuitry is all solid-state, meaning there are no problematic mechanical relays to fail. For additional safety, each trim circuit has two solid-state control switches wired in series, and each switch is independently commanded (by two different command mechanisms) by the microprocessor.

The VP-X connects to standard (up)-off-(down) flap switches, the flap motor, and optionally a flap position sensor. The flap switch can be located on the stick, throttle, or on the panel. The pilot and co-pilot switches are both wired directly to the VP-X.

Solid-state, no relays or black boxes
The control circuitry is all solid-state, meaning there are no problematic mechanical relays to fail. For additional protection, the flap circuit has two solid-state control switches wired in series, and each switch is independently commanded (by two different command mechanisms) by the microprocessor.

Motor run-on protection
Some flap motors, like the one used by Van’s aircraft, have no internal limit switches and will run continuously if not controlled properly. You can specify the maximum motor run time, after which the motor will shut off and an alert displayed on the EFIS.

Backup flap control
If your flap switch becomes inoperative, you can control the flaps from the EFIS screen.

Flap switch disable above a certain airspeed
The flap down switch is automatically disabled above a specified airspeed. The flap up switch works at all times. No mechanical airspeed switch is required.

Automatic starter disable
If the engine in running, the starter circuit is disabled. This means you can install a starter switch on the stick or on the panel and not worry about hitting it accidentally during flight.

Starter annunciator
You see an annunciator on the EFIS whenever the starter contactor is closed. This is important as it can be difficult to detect a starter that is engaged once the engine is running.

NOTE: Either a wiring harness kit or connector-only kit is required with the VP-X system (not included in price). 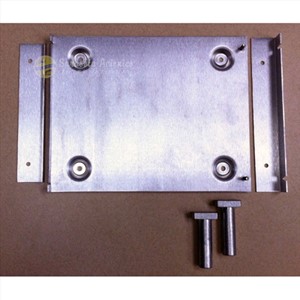 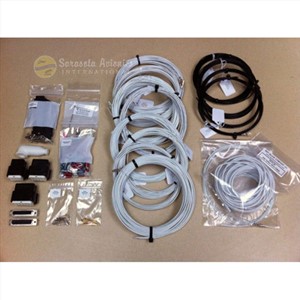 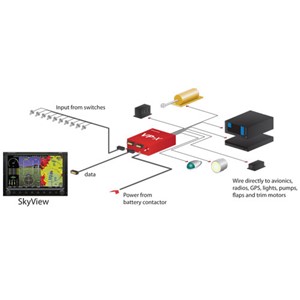 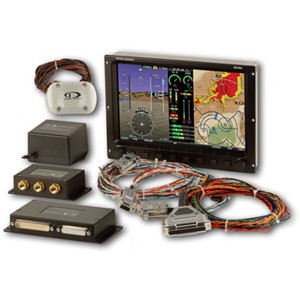 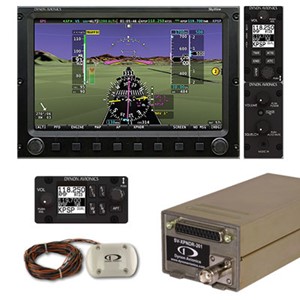 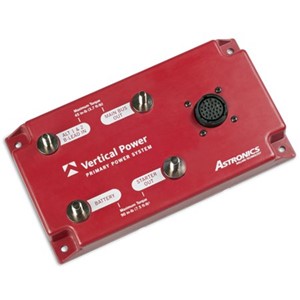 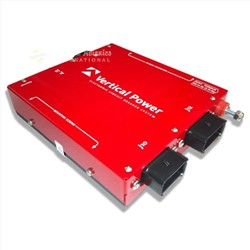