The benefits of flying with an Electronics International Engine Analyzer are extensive. E. I. has been manufacturing Analyzers which are relied upon by thousands of pilots around the world since 1980. The Ultimate Bar Graph Engine Analyzer (model UBG-16) is the most sophisticated instrument in our arsenal. Its unique features were designed to provide you with the ultimate tool for detecting engine problems in their earliest stages and assisting you in operating your engine safely and economically.

32 Pilot Programmable Limits: The UBG-16 incorporates a Pilot Programmable High and Low Alarm for each of its 16 channels. Every engine and every cylinder on an engine operates at a different temperature. The UBG-16's 32 limits allow you to set a high and low alarm for each cylinder in accordance with that cylinder's normal operating temperatures. If any cylinder's temperature drifts outside its normal operating range, you'll get an alarm before the problem can cause excessive heat, stress or wear on your engine. These 32 pilot programmable limits provide the ultimate in early problem detection. An external warning light and voice are available.

Normalized Mode with Memory: Because an engine's EGTs are all different, it can be difficult to spot a change in temperature in a single cylinder. In the Normalized Mode, all the EGT columns may be set to the same level. The offsets for each cylinder are stored in long term memory (20+ years). With the columns normalized to the same height, it is easy to spot a problem (one column will be higher or lower than all the others). If any cylinder's temperatures change in the next week, month or year, you'll see it. This is a powerful diagnostic tool not found on other units!

Lean Mode with True Peak Detect: The UBG-16 incorporates the most advanced leaning features in general aviation. As you lean your engine, one cylinder's EGT will reach its hottest temperature (peak) before all the others. Any further leaning will cause that cylinder's EGT to decrease. When this happens, the UBG-16 will blink "PEAK" in the digital display and show the hottest temperature reached (example "PEAK 1436"). If for any reason an EGT dips during leaning (a common occurrence), this will be a false peak. If you continue to lean (a small amount) and the EGT increases past the false peak, the UBG-16 will switch back to the Lean Mode and show "LEAN" in the digital display (example: "LEAN 1437"). Handling false peaks is not a problem for the UBG-16 as it can be with other units on the market. 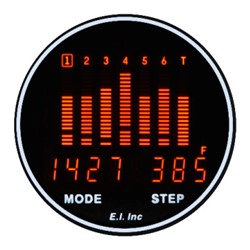