Many of the new GPS navigators output composite roll steering command. The Cobham GPSS function can interface with these navigators to fly a complete, pre-programmed flight plan—hands off!  If the GPS database includes instrument approach procedures, the flight plan could also include an approach to the destination airport. GPSS is available as a standard feature on the Cobham System Fifty Five X autopilot, and is also available as an upgrade to any existing Cobham autopilot.

What is it?
Historically, general aviation autopilots have flown navigational flight paths by either “tracking” or “coupling to” CDI or HSI needle deflections. This means that the system had to deal with needle deflection variations and noisy signals, resulting in some unintentional wandering, particularly at station passage.

Pilots of “big iron” have enjoyed the benefits of roll steering since the early 60’s through the functional output of Inertial Navigation System (INS). Their flight management systems output roll steering commands to the autopilot for all of the leg types typically encountered in instrument flying. Roll steering commands are inherently more accurate as they are based on known location, flight path, ground speed, and anticipated maneuvers; and they fly the aircraft much more precisely.

How does it work?
As opposed to “tracking”, which essentially is reacting to signal input, GPSS anticipates course changes. When approaching a waypoint, for example, GPSS transitions to a new leg by anticipating arrival at the waypoint, and initiating a coordinated turn so that the aircraft is established on the new heading without overshooting or under-shooting the new course.

When the aircraft is equipped with a GPS navigator that outputs composite roll steering commands, the pilot can hand off the steering of the aircraft for enroute or approach flight directly to the navigator. In enroute flight, GPSS will fly the desired flight path as defined by the flight plan stored in the GPS, very accurately, since the GPS not only knows exactly where it is, but where it’s going.

As the leg changes are anticipated, the GPS navigator calculates the exact turn initiation point required to fly from the centerline of the current leg directly on to the centerline of the new leg, based on the ground speed of the aircraft. It then sends steering commands to the GPSS function, and the autopilot flies a precisely curved transition path between the legs.

In addition to more accurate course tracking, GPSS significantly reduces the pilots’ workload by not having to set the course arrow or heading bug at leg changes (although many pilots may make those setting changes for enhanced situational awareness).

Whatever the capabilities of your GPS system, GPSS can fly it... now and in the future. 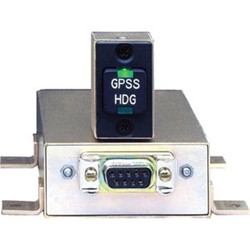