The PMA8000G audio panel presents significant advancements in audio panel technology. It will fit pilots who expect more from their audio panel while not adding any additional work load or complex set of push button sequences. The PMA8000G is a natural choice for pilots who demand ease of use with a deep set of audio panel capabilities.

Introducing Flightmate®, the first system ever to be available in an audio selector panel. The pilot can create checklists, emergency procedures, just about anything that pilot can say, they can store into non-volatile memory, making those checklist chores a bit easier.

IntelliAudio® is another standard capability that will make listening to multiple radio calls manageable. With Com 1 in the 10 O’clock position and Com 2 in the 2 O’clock position, pilots can pay attention to the radio that is most important at any one instant of time.

Bluetooth® interconnectivity allows the pilot to have access to their Bluetooth® enabled telephone or entertainment device. The ability to contact ATC by way of the telephone with the engines running and radios tuned and set at an uncontrolled airfield makes getting into the air under IFR condition much easier.

Aural alert annunciations can be program right from the front panel while using the pilot’s headset microphone to record them. Now you can take up to 4 discrete inputs and have them associated with pre-recorded messages, making it easier to determine exactly what condition needs to be address.

PS Engineering has also included a USB charging port that is rated at 10 watts. This charger provides enough power for iPads that are running the most demanding application.

Finally, ease of use. The new user interface makes accessing advanced functions much easier than in past iteration of the PMA8000 series. 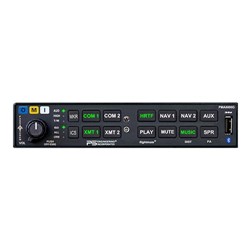