The GPS 500W and its slightly smaller companion, GPS 400W, provide big-picture situational awareness, WAAS navigation and a host of interface capabilities. GPS 500W is a WAAS-certified GPS with color moving map and includes the popular features of the GNS 530W — minus the nav and comm. GPS 500W can be augmented with optional Class B TAWS alerting to warn you of potential terrain and obstacle conflicts along your flight path.

GPS 500W is one smart box that is simple to operate. Thanks to intuitive software, logical page design and efficient knob layout, this unit makes so much information easy to use. Its user-configurable display simplifies access to massive amounts of pilot-specific data.

GPS 500W is easy to interface with a wide array of optional sensors and tracking systems, allowing you to see and avoid hazards such as threatening weather, lightning or air traffic. With an optional subscription to XM WX Satellite Weather™ and the addition of the GDL 69 or 69A datalink receiver, you’ll have access to up-to-the-minute, high resolution weather for the U.S., right in the cockpit. Information includes NEXRAD, METARs, TAFs, lightning and more and can be laid directly over Jeppesen and topographic map databases. With an additional monthly service fee, GDL 69A delivers XM Satellite Radio to your aircraft. Add the Garmin GTX 330 Mode S transponder, and GPS 500W will also display Traffic Information Services (TIS) alerts that identify surrounding air traffic. 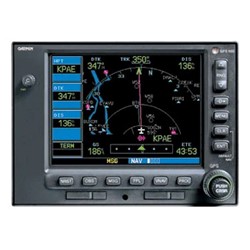