The G1 GEM offers the basic monitoring features for EGT/CHT/TIT and CT (Carburetor Temperature) as the other G-series GEMs but not the advanced leaning features (that require real-time fuel flow data).

All EGT/CHT/TIT/CT data is continuously displayed in colour-coded bar-graph and numeric form, but neither mixture lean-of-peak (LOP) nor rich-of-peak (ROP) indication is provided. Leaning boxes do appear following peak-EGT events but the delta temperature number inside each leaning-box only shows the magnitude of temperature drop.

Users of the G1 GEM should disregard references to GEM fuel flow indications in this manual. Similarly any feature that requires use of the rotary control knobs or user configuration screens is not available on the G1 GEM and should be disregarded.

Protect Your Engine By: 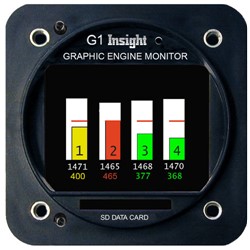