This is EI's CGR package for twin aircraft with two CGR-30P heads included.

PICK SECOND ARC FOR EACH HEAD:

PICK 4 PRIMARY FUNCTIONS FOR EACH HEAD:

PICK UP TO 5 ADDITIONAL FUNCTIONS FOR EACH HEAD:

The following functions are included at no charge:
The functions below are available for an additional cost:
1 Measuring Fuel Flow on a pressure carburetor requires an FFDM-1
2 Turbocharged engine requires an upper deck pressure transducer
3 Fuel Level Sensors not included 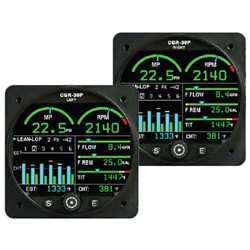