Garmin is announcing a new, intuitive, safety-enhancing, and simple to install angle of attack (AOA) system for general aviation aircraft. The system is comprised of the new GI 260 AOA indicator, GAP 26 angle of attack probe, and GSU 25 air data computer. The GI 260 is designed for quick, at-a-glance understanding of AOA during the most critical phases of flight and offers audible alerts in the event of a high-workload situation. This new system supports the FAA’s recent initiative to broaden adoption of Angle of Attack displays to improve safety. Garmin is now bringing this safety enhancing technology, typically only found on military and commercial aircraft, to general aviation aircraft - all at a price within reach.

Angle of attack offers a precise display of the angle between the wing and the oncoming flow of air. The AOA system provides pilots with a visualized indication of the flight characteristics leading to a stall using a combination of colors and chevrons to help the pilot easily interpret the information. When approaching an impending stall, the GI 260 AOA indicator offers pilots progressive audible and visual alert as the aircraft nears the critical angle of attack. Unlike a lift reserve indicator, the AOA system uses industry-leading normalized AOA technology, providing superior performance throughout all phases of flight.

The AOA System is expected to become available for installation in general aviation aircraft in the 3rd quarter. Various packages are available that accommodate the appropriate aircraft voltage and include the option for a heated probe. Additionally, the GI 260

AOA indicator is available as an option for G3X and is expected to become available in the 2nd quarter.

As illustrated below, there are four types of intuitive indications to help the pilot easily interpret and respond to these potential aircraft configurations. Green bars at the bottom signal the first indication of angle of attack and build up to the calibrated approach ‘target’. Continual increase of angle of attack beyond ‘target’ AOA, indicates yellow caution alert bars and chevrons pointing down. Once the wing has reached it’s critical angle of attack, red chevrons pointing down lead to a flashing indication to provide the pilot a visual indication of critical angle of attack and includes an audible alert with increasing intensity until reaching a rapid beeping tone with the top flashing red chevron. 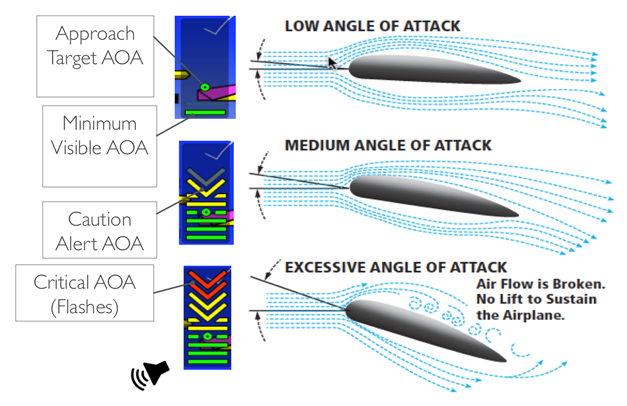