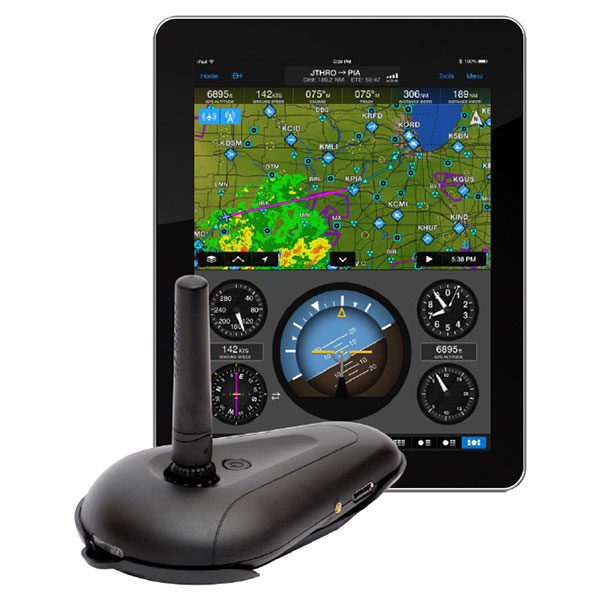 The GDL 39 3D portable ADS-B receiver is a simple and economical solution for pilots who want to receive the benefits of ADS-B In. The GDL 39 3D combines a dual link ADS-B receiver that conveniently supplies ADS-B traffic, weather, and WAAS GPS data to Bluetooth compatible iOS and Android devices. The Garmin Pilot app enables both the display of backup attitude information and the optional moving map page with weather and traffic overlay while in split screen mode, so it’s easy to view flight information alongside the attitude information at the same time. The GDL 39 3D’s ADS-B weather and traffic is also compatible with the aera 796/795, aera 500 series, and GPSMAP 696/695.

Pilots can receive ADS-B traffic information and alerts to help identify potential traffic conflicts. The dual link GDL 39 3D offers a comprehensive view of traffic information and receives traffic on both ADS-B frequencies, 1090 ES and 978 UAT. ADS-B In technology enables the GDL 39 3D to receive Traffic Information Service-Broadcast (TIS-B) and helps pilots gain a better understanding of the traffic picture around them. The GDL 39 3D includes advanced ADS-B features, including TargetTrend™ relative motion tracking and SURF technology. TargetTrend provides a faster, more intuitive way of judging target trajectories and closure rates in relation to your aircraft's position. In dense traffic environments, TargetTrend allows the pilot to more easily discern the aircraft that pose the greatest threat, which can save vital time and reduce workload. SURF technology also supports the display of ADS-B-equipped surface targets on the map screen so pilots are more aware of other aircraft and surface vehicles on the ramp.

The smart GDL 39 3D collects and stores all available traffic and weather data in the vicinity so it is available as soon as you turn on the display. It's capable of simultaneously providing wireless data to 2 devices while hardwired to a third.

Back-up attitude information, traffic, and weather are currently available within Garmin Pilot compatible mobile devices via the built-in Bluetooth connection. Garmin products including the aera® 795/796, aera 500 series, and GPSMAP® 695/696 are traffic and weather compatible, while the GPSMAP 396/495/496 have the capability to display traffic targets (up to seven). As Garmin continues to update portable compatibility, check the ‘Compatible Devices’ tab on the GDL 39 3D webpage to understand the most up-to-date details. The GDL 39 3D is available today, starting at $849.00, and the GDL 39 3D bundle with an optional battery is $899.00. The price of the existing GDL 39 is now $599 and $649 with the optional battery. Also included with the purchase of the GDL 39 3D is a free trial of Garmin Pilot.