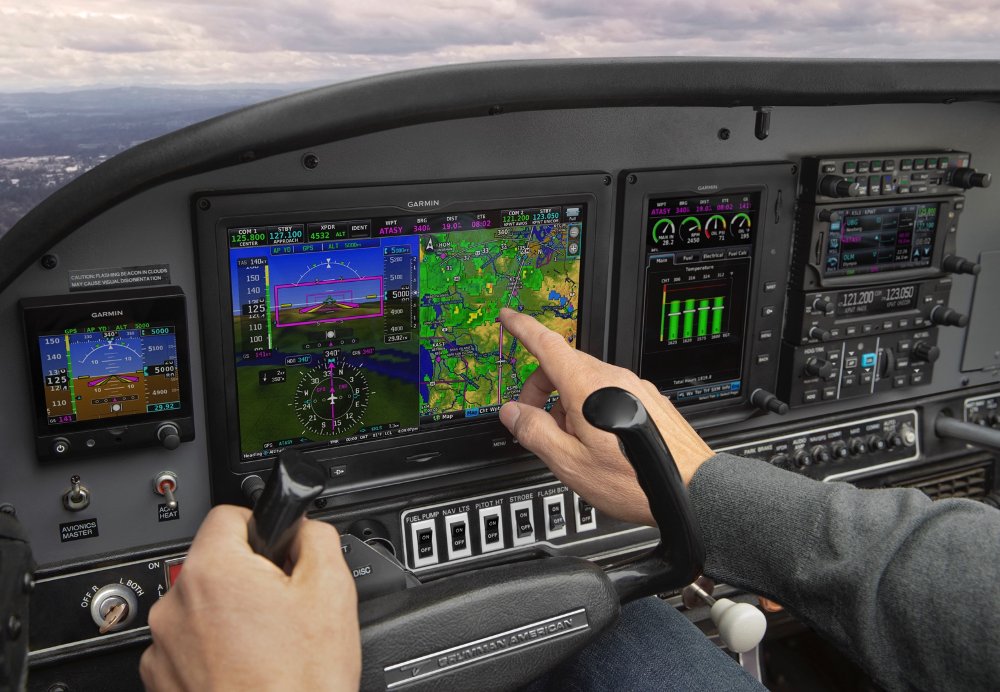 Garmin is pleased to announce the certification of G3X Touch™ flight displays for hundreds of certificated aircraft. G3X Touch offers a variety of scalable panel configurations and a superior feature set that includes wireless connectivity and synthetic vision as standard, as well as options such as display redundancy, advanced autopilot compatibility, engine monitoring and more. Touchscreen displays offer an intuitive user interface and through any combination of the touchscreen or dual-concentric knobs, pilots can efficiently perform common in-flight functions such as Direct-to navigation, setting altitude pre-select or radio tuning. Pilots will also appreciate the seamless inflight experience behind G3X Touch as the user interface is harmonious with multiple Garmin products, such as the GTN™ 650/750 and new GPS 175/GNX™ 375 navigators. The FAA has granted installation approval of G3X Touch via an AML STC that features nearly 500 certified single-engine piston aircraft. 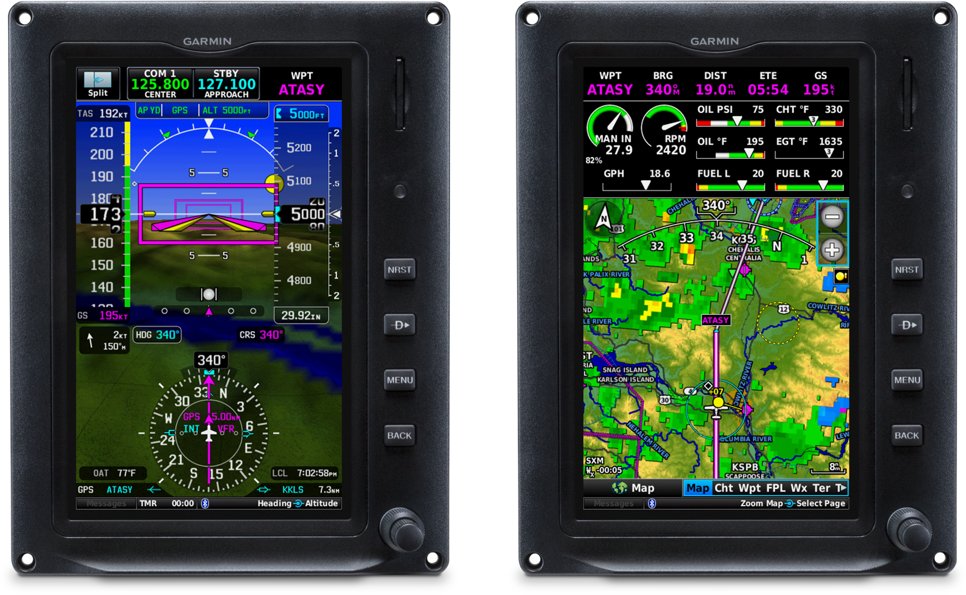 Multiple panel configurations and display options allow pilots and aircraft owners to better leverage their current and future avionics investments. For space-limited panels, a single 10.6” or 7” display can accommodate both PFD and MFD windows within the same unit. The 10.6” display can also include an EIS strip for additional versatility. Another option allows two 7” screens to be installed side by side and accommodate PFD, MFD and optional EIS functionality. Or pair a 10.6” split-screen unit with a 7” format to provide even more flexibility to lay out the preferred arrangement of PFD, MFD and optional EIS displays. In configurations where multiple displays are installed, the G3X Touch system offers redundancy and reversionary mode as a single display is capable of showing all primary flight information, including engine information when installed. For aircraft owners that have already installed a G5 electronic flight instrument in their aircraft, they can easily add a G3X Touch display to take advantage of the redundancy benefits associated with this configuration. The building-block design of these four approved cockpit configurations give aircraft owners scalable upgrade options that suit a variety of panels. 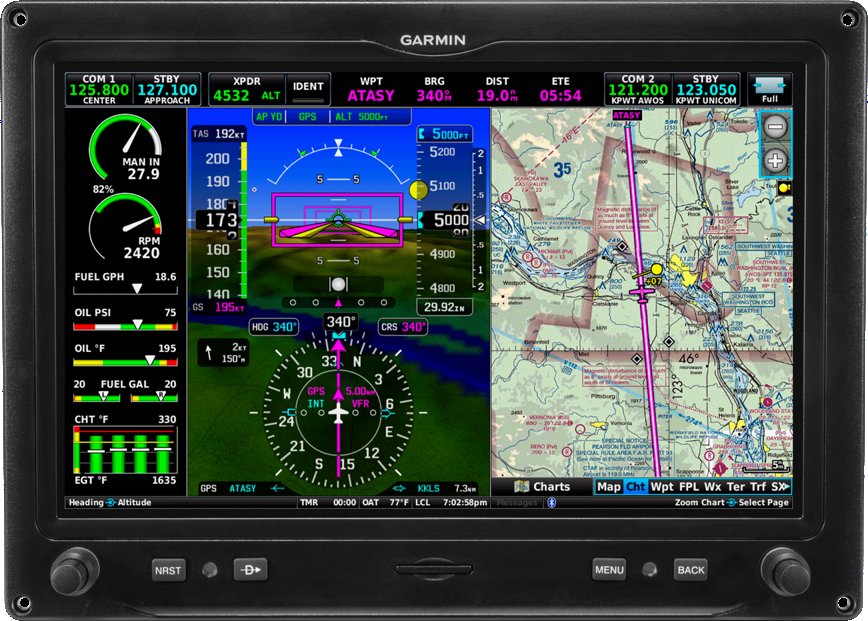 The G3X Touch suite offers an impressive array of standard features that gives pilots greater situational awareness throughout every phase of flight. Synthetic vision (SVX) comes standard on all G3X Touch displays and provides a rich, three-dimensional depiction of terrain, obstacles, water features, the runway environment, and more. Capable of serving as a standalone VFR navigator, G3X Touch provides benefits that help further situational awareness in visual conditions with features such as vertical navigation (VNAV), which allows pilots to generate a vertical descent profile by setting an altitude constraint in the flight plan. VFR sectionals and IFR enroute charts display pertinent information pertaining to VFR/IFR flights, and geo-referenced instrument approaches improve situational awareness by overlaying own-ship position information on the instrument approach chart. Modern tools such as wireless connectivity are also available as standard. Wireless flight plan transfer, the sharing of traffic1, weather1, backup attitude information and more with a compatible tablet or smartphone are all available via Connext®.

G3X Touch flight displays for certificated aircraft can interface with a variety of optional Garmin equipment including: 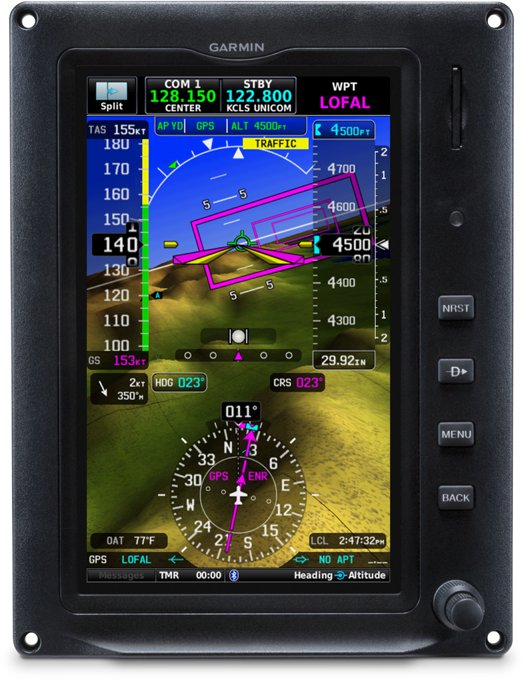 G3X Touch systems for certificated aircraft are expected to begin shipping in April at list prices of $7,995 for a single 7-inch display and $9,995 for a 10.6-inch display. These base system prices include PMA versions of the G3X Touch display, GSU 25D ADAHRS and GMU 11 magnetometer — as well as a GTP 59 temperature probe and appropriate install kits. There is no additional cost for the STC. Optional components such as the GEA 24 or GDL 52R are also available with PMA, and G3X Touch for Certificated Aircraft utilizes the same engine sensor kits as TXi series systems.