The full dot-matrix LCD allows for high visibility and clearly shows alphanumeric characters and icons. Programming memory channels and other radio settings can be simply made from the front panel by radio users. These customizing functions can also be restricted, depending on the radio settings.

* The ANL and ANC functions cannot be used at the same time.

The IC-A120 has IP54 dust-protection and water resistance. This construction allows for use in open-air vehicles.

The dualwatch function checks the priority and operating channels alternatively. The ON-Hook scan function automatically starts scanning when the hand microphone is hooked on the microphone hanger. When you take the microphone OFF hook, the scanning stops at the priority channel or displayed channel (according to the preprogramming).

When using a third-party headset with the optional OPC-871A headset adapter, the side tone function allows you to monitor your own transmitted voice via the connected headset. Even when using a hand microphone, your voice can be monitored from the headset.

Listen to received audio through the HM-217’s built-in speaker. From the speaker-microphone’s front panel, access up/down buttons and two programmable buttons (P1/P2) which can be used as a shortcut to activate frequently used functions.

* Use of 8.33 kHz channel spacing is prohibited in Canada 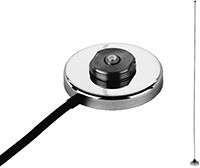 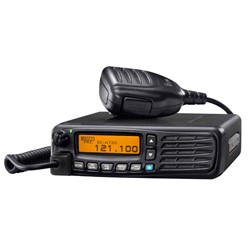