The B-Zero SLIM is a clever daily bag for iPads, Ultrabooks, and assorted technology and personal items. Organize all your small stuff once and then you'll have everything with you no matter which configuration you build.

The B0 SLIM is the thinnest possible FLEX SYSTEM configuration. This is sometimes called the "The iPad bag" because it works so well as an ultra-thin computing and personal bag - a "man purse" if you will. The B0 SLIM also serves as the obvious starting point for all other configurations. You can add and remove space as necessary just by adding different Center Sections.

The B0 is simply the POCKET CAP FRONT and the FLAT CAP REAR modules zipped together. It has no definable interior storage dimensions since it is just two End Caps put right against each other, but the flexible nature of the parts allows one-half inch to three-quarters inch of flat items to fit inside between the modules.

The iPad (or other tablet) is most commonly stored inside the long slip pocket on the back of the FLAT CAP REAR, and then the space between the two modules has the capacity to store a 13" Ultrabook laptop or a thin stack of Manila folders for documents, or a magazine or two. So it is possible to carry a thin laptop AND an iPad with this configuration.

It is possible to carry the B0 using both a handle and a SHOULDER STRAP because of a clever (and Patent Pending) clip called the "D3 CLIP". A pair of D3 CLIPS attach to two loops on the top (or another set of loops on the side) of the bag. And then the SLIM HANDLE and SHOULDER STRAP attach to those D3 CLIPS. See the Gallery for photos.

The POCKET CAP FRONT module offers a variety of pockets organized into three "main" pockets and six "secondary" pockets for a total of nine small pockets on the front panel. In these nine pockets you'll store all the cords, cables, chargers, batteries, stylus, memory cards, USB drives, etc, for all your electronic gear. All these important items will finally be separated and organized like you've always wanted. Not to mention space for your wallet, keys, cellphone, business cards, multi-tool, glasses, pens, markers, and things like Ibuprofen, Chapstick, bandaids, etc, and even your digital camera. There is also a flat half-height slip pocket on the inner surface of the module where you can stow an important document or two like a copy of your medical or your passport.

The FLAT CAP REAR module offers two flat pockets on the outside, and one flat half-height slip pocket on the inner surface of the module. The primary outer pocket is accessed from the top and has a cover flap that is secured with Velcro. This where you'll likely store your iPad (as long as it's not in a thick case), or a manilla folder or two for some documents, or a magazine. There is a second flat panel that covers two-thirds of the outside of the main panel that is broken into two halves - an upper panel and a lower panel. By default, the bottom edge of the upper panel is "tucked" into the top edge of the lower panel. This allows both panels to act together as a single slip pocket that works great for sticking a boarding pass or other simple paperwork here. If the top panel is "untucked" from the bottom panel, this allows the telescoping tubes of a suitcase or folding cart to pass through and the panel serves to secure your bag to those tubes (especially when this FLAT CAP REAR is attached to other modules to form bigger bags like the B2 COMPUTE, B4 SWIFT or the B7 FLIGHT). Then, when you're done putting your BrightLine Bag on top of your suitcase, you can just "tuck" the top panel back into the bottom panel and it becomes a slip pocket again. 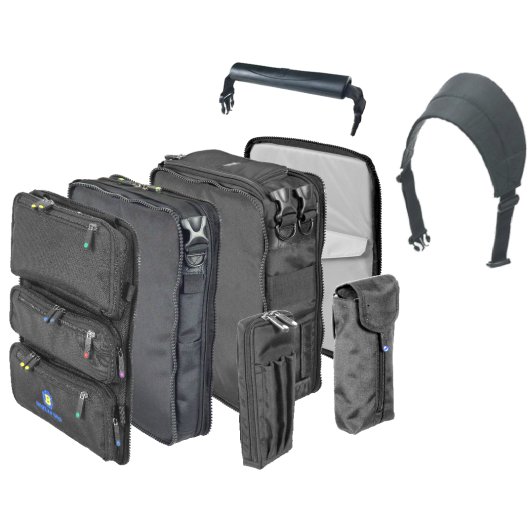 Pick your parts. Build your Bag.

Your life has different arenas, each with its own gear, so your bag should serve those needs by making it easy to add and remove space when you need. Brightline Bags calls this Adaptive Utility™.

The top front pocket cover of the POCKET CAP FRONT module can be removed to make it easy to add custom embroidery. Just remove this pocket cover and hand it directly to your current embroidery provider.

The bag material is flexible, so the size of the interior storage may be able to "stretch" out just a bit in one direction or another. Also keep in mind that over-stuffing your bag can cause seam or material failure, and this is not covered by warranty.

The B0 SLIM comes with a SHOULDER STRAP, and also a SLIM HANDLE KIT. (Note that the B0 does not include a MAIN HANDLE - it isn't necessary.) 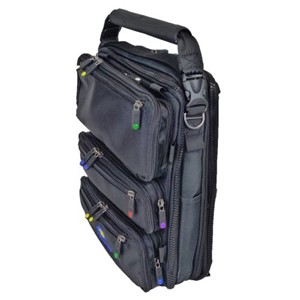 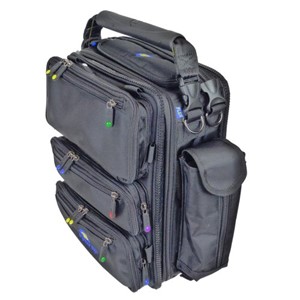 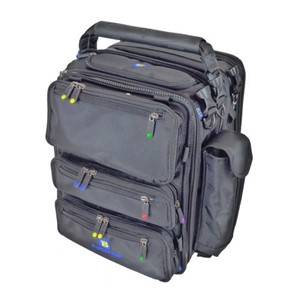 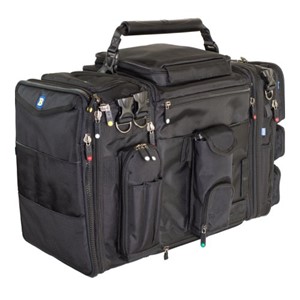 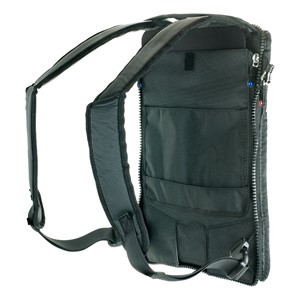 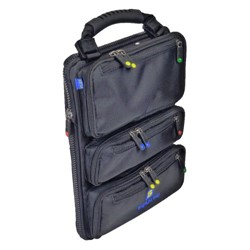