The HS34 is an optional expansion module that extends the HSI function already built into and displayed on Dynon’s EFISs. Thispanel-mounteddevice not only expands the HSI functionality but also enables several new features for any Dynon EFIS, EMS or FlightDEKinstrument to whichit is networked.The HS34 is available in vertical and horizontal panel mount configurations.

The expansionmodule concept providesexceptional value and performance while preserving the affordability of Dynon’s existing equipment. This modularapproach offers greaterflexibility when configuring new aircraft panel systems and facilitates future expansion if so desired.

While all of Dynon's EFISinstruments currently include HSI functionality, full compatibility with some GPS and NAV radios has been limitedby the serial connectionmethod.

The HS34 overcomes these restraints by adding ARINC-429, analog, and serial interfaces to covermany popular radios. Withthe addition of an HS34 to an EFIS, full compatibility is now possible with radios such as the Garmin 430/530. Thisincludes advancedfeatures IFR pilots demand, such as CDI auto-scaling and full vertical guidance information from WAAS-enabled units. TheHS34 effectivelyeliminates the need to install a conventional CDI/GS head.

The HS34 expansion module is network connected to Dynon’s line of avionics via the Dynon Smart AvionicsBus(DSAB). This two-wire connection not only simplifies wiring but extends individual module benefits to multiple interconnectedDynoninstruments.


The HS34 is compatible with NAV radios using the industry-standard ARINC-429 or Analog outputs. It'salsocompatible with Navigation GPSs with either ARINC-429 or RS-232 serial output streaming either NMEA-0183 or Aviation format. TheHS34requires that you have at least an EFIS-D10A, EFIS-D100 or FlightDEK-D180 installed in your plane.

Below is the list ofdevicesthat have been successfully tested with the HS34.

For CDI and Glideslope: 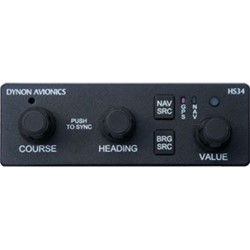